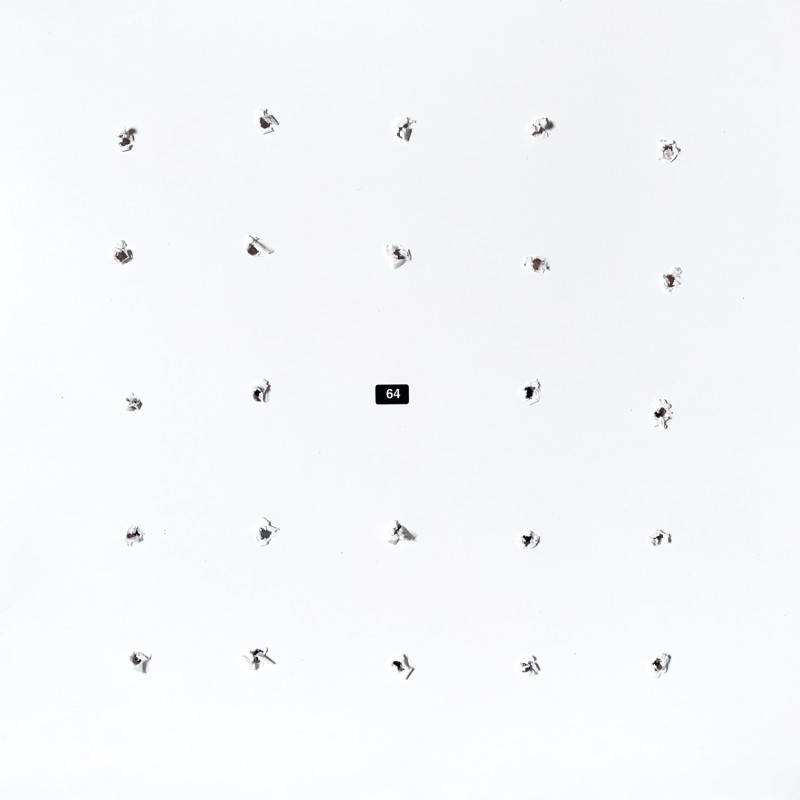 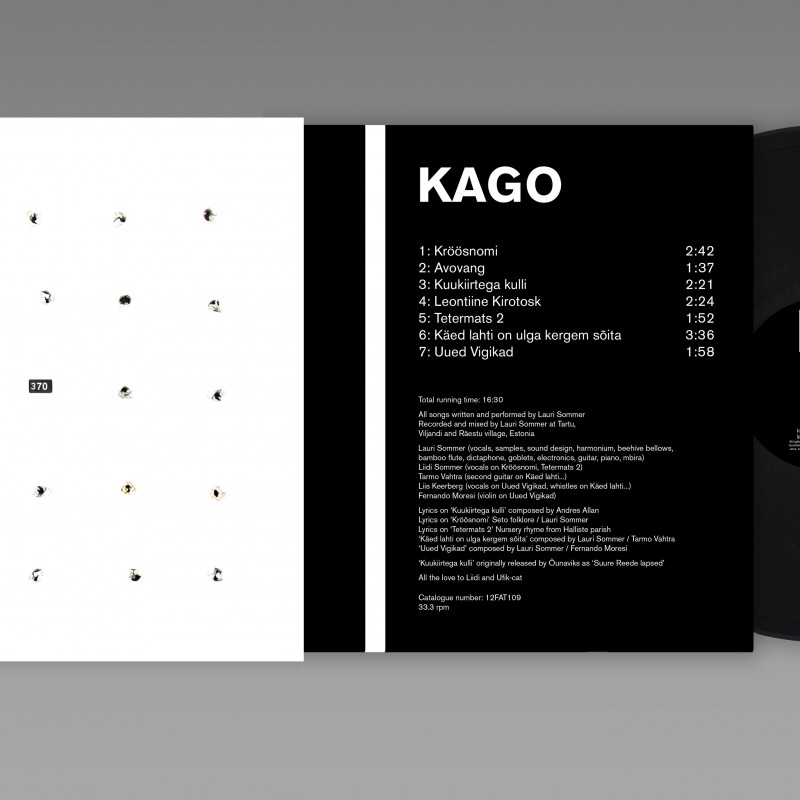 Following numerous false-starts and delays, the twenty-fourth - and last ever - issue in FatCat’s long-running and much-loved Split 12” Series finally arrives on the 25th anniversary of the Brighton-based label. It features acclaimed Canadian singer/composer Ian William Craig alongside the brilliant but little-known Estonian poet/singer Kago. Whilst markedly different, these two fine artists each use their voice as a central element of their craft, mediating it through technology to conjur startlingly singular sound-worlds. Neither side here will sound quite like anything you’ve previously heard.

Another high quality, album-length release, housed in the series’ distinctive aesthetic of hand-drilled and numbered sleeves with all information revealed on the stark black/white typographic layout of the inner sleeve, the record is available both digitally and in a one-off vinyl pressing of just 500 copies.

Dating to the very start of the FatCat label, with a first release way back in 1997, the Split Series was set up as an occassional outlet running in parallel with the label’s early output. Its aim was to curate high-quality, challenging series of 12” records that resisted easy classification and would continually shift, keeping the listener guessing as to what might come next and utilising the unique qualities of the format in an engaging, creative way – whether it be pitting different sounds/styles against one another; drawing out links and similarities; or simply introducing unknown artists on the flip of a more established name.

Originally intended to last for just a few years, it’s taken almost a quarter of a century to reach this point of closure, with each release seeming to up the ante for what might come next. Hosting a total of forty-eight artists spanning five continents (including the likes of Gescom, The Dead C, AMM, Merzbow, Kid 606, Fennesz, Konono No. 1, Katie Gately, and Animal Collective’s Avey Tare), over the years the series became something of a cult, collectible entity, accruing regular critical acclaim and a reputation as a gateway outlet for adventurous collisions and pioneering new sounds. NME wrote how the series “has built up into a virtual academy of the abstract... [where] the shock troops of post-everything music gather”; whilst last time out, The 405 stated “when FatCat's split series draws to a close with its next release, it will have left an indelible mark on the face of modern electronica”.

And so, this final missive sees Vancouver-based Ian William Craig delivering an expansive, side-long slice of visceral, tape-based electronic experimentation that flickers, sizzles and surges. Craig should need little introduction, having garnered widespread acclaim for a stunning series of albums on Recital Program, FatCat’s 130701 imprint, plus a recent collaborative effort with pianist Daniel Lentz on RVNG INTL. Just before the Covid pandemic, Thom Yorke invited Ian to support him on a US tour, and his eerily prescient ‘Red Sun Through Smoke’ LP - recorded a year earlier in an intense period of personal loss and environmental catastrophe - came out in March 2020 to vast praise. Craig has been described by MOJO as “a trained opera singer manipulating analogue recordings of his own voice to conjure up bewitching traceries of phantom arias, born from warped tape and sonic decay... a singer destroying his own work, yet creating something more elegiac and profound in the process"; by Rolling Stone as “sounding like a collaboration between between Bon Iver and William Basinski”; and by Pitchfork as “like Tim Hecker producing the outré Jónsi Birgisson album many expected but never got as Sigur Rós' star rose”.

On the incredible, 19-minute-long ‘Because It Speaks’, Ian takes the offer of using the split 12 as a format for experiment and runs with it. Conjuring a world out of clipped vocal loops run through a chain of effects and customised tape circuitry, the result is a sprawling, slowly morphing piece that feels thrillingly live yet wonderfully controlled. The artefacts of the process lend a gritty, gnarly viscerality – shot through with deep blasts of bass, icy chord-clouds and a richly-textured patina of mechanical by-product: the crackle and fuzz of tape, the hum of the deck and clunking of depressed buttons and tape heads. It’s a brilliant expansive piece that seems a perfect fit to help close out the series.

Occupying the flipside, Kago is the alias of Estonian poet / singer / writer Lauri Sommer. Known to FatCat since we hosted a couple of his tracks on our online demo archive back in 2006, he’s someone we’ve remained close with and visited in Estonia numerous times. In 2008, Lauri played at FatCat’s ‘Open Circuit’ festival in Hasselt, Belgium, mesmerising a crowd with his performance and winning admirers in the watching Animal Collective. Sommer began as a musician in the early ‘90s and has played punk, folk, indie, made dadaistic electro, sang in a church choir and studied English folk songs. Active as Kago since 2003, he has released seven albums, all but one of them via the Tallinn-based Õunaviks label. These cover a mix of folk-blues singer-songwriter material, renditions of Southern-Estonian runic songs, dictaphone rhythms and DIY electronica, quiet piano pieces, stretched-out ambient and radio dramas. Though the name Kago was taken from the leader of a group of alien travellers in Kurt Vonnegut's novel, ‘Breakfast Of Champions’, and means "travelling chair" in older Japanese, Lauri lives something of a reclusive, hermetic existence even within his own country, living alone on his farm surrounded by forest. He has rarely travelled or performed outside of Estonia, and his music speaks deeply of the land it springs from. A member of the Seto ethnic grouping (a tiny, indigenous Finno-Ugric ethnic and linguistic minority in the far south-eastern corner of Estonia and north-western Russia), whose rural lives were united and regulated by the power of song, Lauri’s membership of male village choir Ütsiotsõ attempts to keep the Seto’s polyphonic choral tradition alive. As Kago, his songs are freer, yet remain heavily rooted in those now decaying cultural traditions, often based on a long repetition of simple vocal phrases.

A more piecemeal collection of shorter compositions, Kago’s side here is equally singular, opening out a strange and potent home-brewed world that feels both intimately inviting and utterly other. Opening track ‘Kröösnomi’ strikes immediate parallel With Craig’s own practice. A tape motor whirrs into life, playing back a grainy recording of Lauri reciting an old Seto folk song on a cheap dictaphone machine, over which he singes alternate lines, overlaying them in realtime against their taped mirror. Another example of this technique he calls “dictaphone shamanism” can be heard on ‘Tetermats 2’, with further vocal lines recorded to dictaphone, this time played back in crudely punched on/off rhythms over which Lauri sings.

Whilst Kago’s music should appeal to those who fell for the Estonian folk visions of Maarja Nuut or Mari Kalkun, this is palpably deeper and darker gear. Recorded at home with limited equipment, it feels utterly grounded and gritty, yet simultaneously floating free in some strange dream-space. Kago’s lo-fi, dog-eared aesthetic and psychedelic sensibility lets in the world around him and reveals a heavily worn and tactile, old-world sound, whose edges appear frazzled and peeling away, opening into a deep sense of time and engagement with elemental forces. There seems little separation between life and art – instruments lying to hand, family members and sounds of the surrounding environment all find their way into the recordings. On both ‘Kröösnomi’ and ‘Tetermats 2’ Lauri’s 4-year-old daughter Liidi joins in the singing, whilst her mother Liis Keerberg sings on ‘Uued Vigikad’ and whistles on ‘Käed lahti on ulga kergem sõita’. Elsewhere, the evocative sound design includes recordings of animals and birds; oodd, back-masked effects; and strange wailing noises. Other instrumentation deployed includes guitar, piano, beehive bellows, bamboo flute, goblets, mbira, as well as violin by Fernando Moresi on ‘Uued Vigikad’ and second guitar by Tarmo Vahtra on ‘Käed lahti on ulga kergem sõita’.

An immersive and acid-tinged slice of Eastern European freak-folk, Kago’s side neatly complements that of Ian William Craig and rounds off a killer release that we feel fits the free-wheeling aesthetic of the Split Series perfectly. Released as FatCat begins celebrations of its 25th anniversary, the 24th and final Split Series 12” brings the curtain down in fine style on a long-running journey that remains resonant.

Thank you for following.