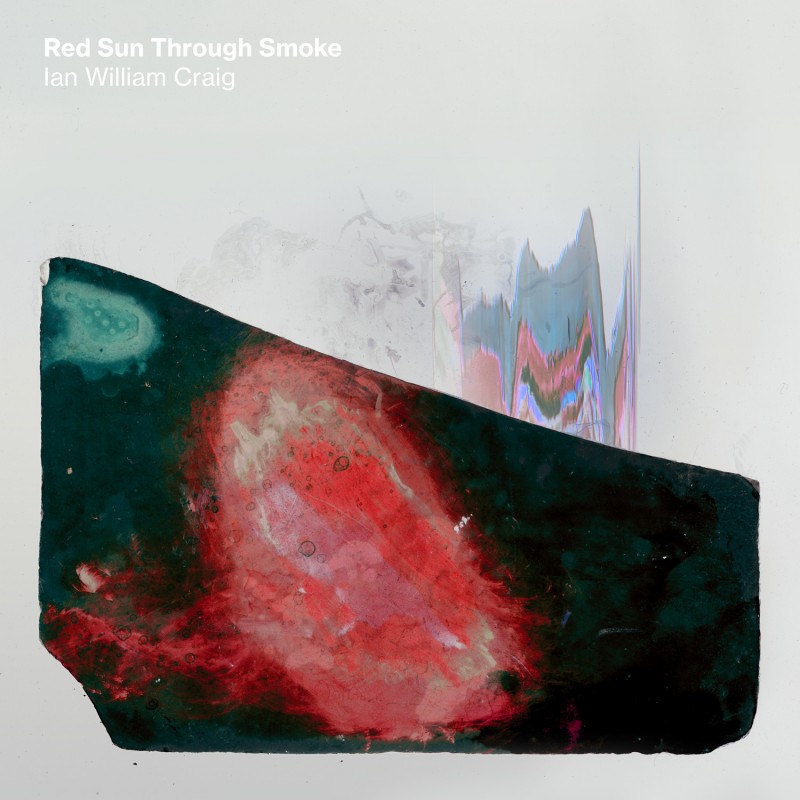 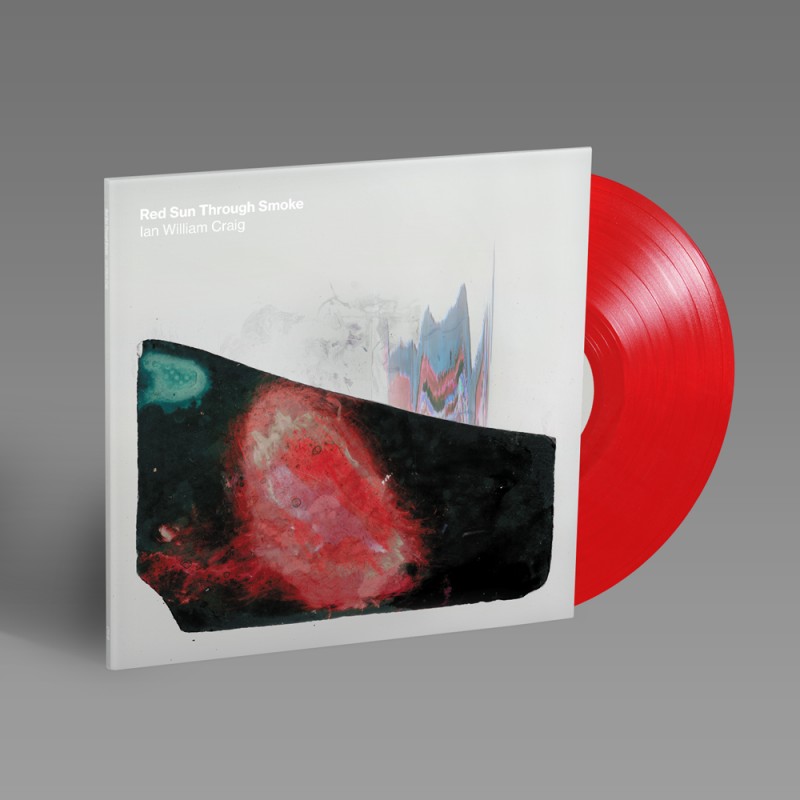 Eighteen months on from his last solo release, Vancouver-based singer/composer Ian William Craig returns with a brilliant and powerfully emotive new album. His first for a long while to be centred around the piano - and also one of his most pared back - the record was made through an intense period of personal loss and environmental catastrophe.

‘Red Sun Through Smoke’ was recorded over two cataclysmic weeks in August 2018 in Kelowna, whilst the city was encircled by the forest fires which, under a warming climate, now regularly rage through British Columbia in summertime. With smoke engulfing the landscape, Ian describes how “the houses across the road couldn’t be seen save for a brief white on white outline. The sun was dull red on grey. The air was becoming steadily dangerous. There was nowhere to go that was not this way; all the space filled up with worry.” Having committed to recording that August, Ian sought a supposedly calmer retreat in which to work. Carrying his gear across the province to set up a temporary studio space, the album was recorded from start to finish in the living room of a small house owned by his grandfather who was now residing in a care facility across the street, having been afflicted with dementia for the past decade. The morning after Ian arrived, his parents unexpectedly phoned to say that they would be flying in too, as Grampa had been moved into palliative care, his lungs filled with fluid as a result of the smoke. Despite this shocking turn of events, Ian's parents convinced him to keep recording, with the process ultimately becoming a document of the difficult place in which they found themselves. One week later, midway through Ian’s recording, his Grampa passed away.

Events were unfolding with an absurd momentum. That same day at least two others in his care home also died from respiratory failure. Ian and his parents sought shared solace in a pub thereafter only to witness a young man collapse from cardiac arrest. No fewer than eight paramedics attended, and after a long, tense time in heavy silence, finally managed to revive him via a cacophony of wires, devices and emergency medical procedures. Minutes after being carried away on a stretcher, the Saturday night karaoke act arrived unaware of the drama and started his routine as though nothing had happened.

These strange two weeks also coincided with Ian falling in love, although even that positive was suitably complicated. Having recently met someone special, Ian only discovered his feelings were mutual a day before she was due to move away to Paris for four months. Separated by 5,000 miles, they began a long email/phone correspondence, not knowing anything about what being together was like. All of this built-up unknown also leaked into the record. As Ian notes, “having a honeymoon period when the person wasn’t actually physically there was altogether uncanny, especially with everything else going on. So, in amongst everything else, there are some unknowing love songs on here for her as well.”

One benefit of recording at his grandad’s lay in gaining access to his piano, which became the record’s anchoring point. Beyond this, the only other instrumentation consisted of Ian’s voice, a shortwave radio set, several modified tape decks and a bunch of tape loops. Ian notes how events helped force the shape of the record and a tendency toward a less layered, more spartan expression. “everything felt raw, I didn’t want there to be anywhere to hide in this record. My parents and I were cramped together in a small house while my grandfather slowly died across the street in a world filled with smoke, after all. So, in this record, more than most, there exist a great many things straight to tape without any effects because there really was no space.”

One mechanical aid whose use he fell back on was an old four-track cassette recorder, repurposed into an impromptu studio looper – a handy device on which to quickly generate and reshape ideas. If a take didn’t work out, Ian could layer something else on top of it, feed it back into itself, or use the deck’s circuitry to introduce eerie distortions. Eventually a melody or set of sounds would emerge around which a song could be fashioned. The lyrics were forged in a similarly piecemeal process. "I would put my diary in front of me,” Ian notes, “turn to a random page and just sing whatever words I found over the top. I didn’t know what else to do really.” That might imply some half-baked or arbitrary outcome, but Ian is a wonderful wordsmith and in truth his writing here is as powerful as ever – a beautiful, impressionistic series of musings on love, loss and the random nature of life; that attempt to sift meaning and find a way of being in/moving through this temporary existence.

Ian’s interest in themes of decay and forgetting is long-standing and frequently noted in discussions of his music. However, the shortcomings of exploring this artistically were brought into sharp relief when confronted with the direct reality of his grandfather’s dementia. “Every poem pales in comparison to life”, he notes. “It felt somewhat artificial making disintegrating vocal loops while my grandfather lost more and more of himself, as he had been doing for years. There is no decaying tape loop in the world that can adequately describe it, because how can we know? Confronted with it, it is actually a brutal and cruel thing to slowly lose like that.” Yet there is also some solace to be found in the memories and the attempts at preservation. Ian recalls how his Grampa had been an avid ham radio operator and how as a child he would let him sit in his den as he manned the radio set and send his voice careening out into the ether. For a kid, in a time before the internet or instant messaging, this felt truly magical, and played a seminal role in Ian’s musical development. "All of the sounds inherent to that process, from the crackling static to the disembodied voices breaking up to the glissando of the frequency dial searching for connection, have directly informed what it is that I do. Perhaps all of the meaning inherent in my work can be distilled into simply loving the aesthetic beauty of that experience. His radio and all that came out of it become almost my entire metaphor.” Some of this old radio equipment remained stowed away in the house, and its swirling noise can be heard on 'Last Of The Lantern Oil’.

Ian extends the radio metaphor to cover his state of mind during the creative process: “This whole record existed without thinking. Between hospital visits and the smoke and emotional support, there wasn’t time for it. I threw away pretty much all expectation and tried to turn myself into something like Grampa’s radio receivers, just there to channel what was going on while the operator was away. Very little time was spent in reflection. I would get some ideas out, iterate on them, shape them, mostly without editing or revising. I made a lot of garbage in those two weeks, which I then sifted through to find what was useful. My process was much more of an archeological one than one of building things from nothing. Besides which, on a record dealing with themes of loss, I thought it was fitting to distill ideas down from the whole and forget the rest.”

Musically, ‘Red Sun Through Smoke’ moves from the sparse vocal take of opener ‘Random’; to the shifting, semi-occluded piano/ choral layering of ‘The Smokefallen’ or ‘Comma’; and the beauty of simple piano songs like ‘Supper’ or ‘Stories’. It’s not until ‘Condx QRN’ that the noise enters fully fledged and excoriating, but a patina of dust and decay is prevalent throughout. The use of smudged drones, occasional incursions of static, distortion and other noises eating away at the material’s edges offers a neat audio corollary to the smoke-filled environment or the progression of mental/physical deterioration. The drifting, untethered sections of overlaid piano/choral parts suggest some spectral unravelling or spiritual departure, whilst the naked simplicity of the piano and voice songs attest to a purity and directness of feeling. Indeed, despite the gathering detritus, ‘Red Sun...’ is perhaps the most stripped down, concise and direct that we’ve heard Ian. The LP ends as it starts, unadorned, “with a different reflection on coming to grips with the random nature of life and distilling everything down into only that which is necessary, without any of the raiment we usually cloak ourselves in.” Welling with emotion, ‘Stories’ is a stunning song and a heartbreaking final note.

Opening track ‘Random’ was the last piece submitted to tape, recorded after Ian had packed up all of his tape decks away and emptied out the house: “I was alone with my thoughts for the first time since beginning to record and I just needed to sing at full tilt for a while... the time spent recording was such a cosmically thick layering of events one on top of each other that the only thing to be done was to give over to the randomness of it all. Singing out at the end, without any tape decks or toys to hide behind, I realised that there wasn’t going to be any meaning or moral gleaned from those events, but that the random and the grief and the love and the sorrow experienced over that time were all tied together. The chance nature of things is what gives them their life. We can’t know or predict, but we can sing and watch the moon set over whatever valley we find ourselves in.”

Forged in trauma and an intense, bewildering slew of mixed emotions, Ian William Craig has created an album of incredible beauty, sadness and depth. 'Red Sun Through Smoke’ is a profoundly moving album, a standout record in a prolific body of work that shows no sign of faltering.