by FatCat Compilations on FatCat Records 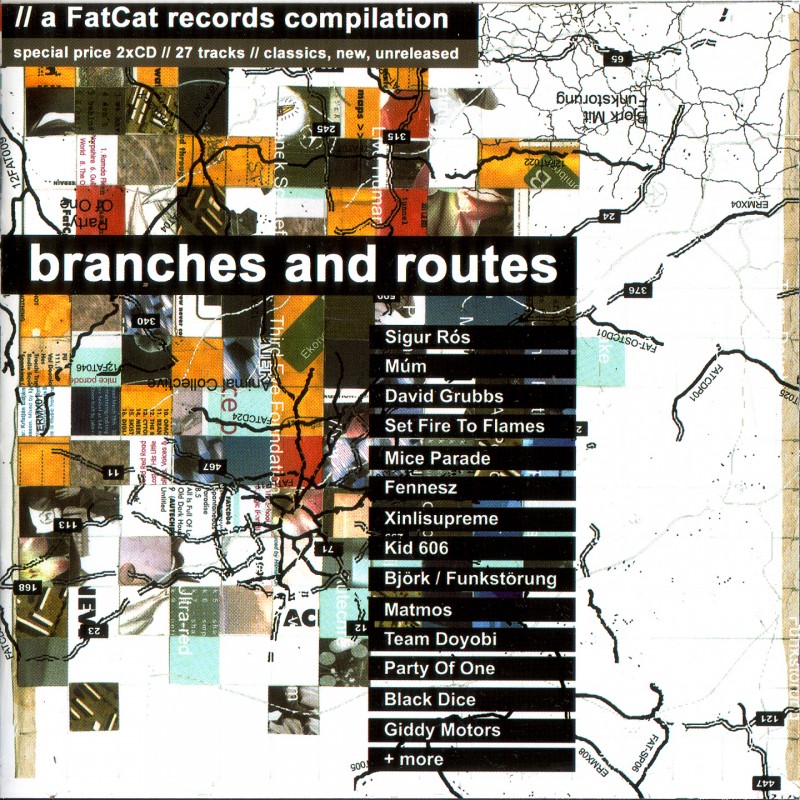 ‘Branches and Routes’ is a stunning and adventurous compilation that stretches its scope across the six years of FatCat’s existence as a label. Serving as a neat introduction to FatCat, the compilation showcases material from the label’s past, present and future. As well as the inclusion of such classic tracks as Múm’s ‘Green Grass Of Tunnel’, Funkstörung’s remix of Björk’s ‘All Is Full Of Love’, Set Fire To Flames’ ‘Steal Compass…’, and Matmos’ ‘Freak N You’, there are unreleased exclusive tracks from Sigur Rós, Drowsy and Stromba, as well as forthcoming ones from Crescent, HiM, and Party Of One.

With 27 tracks running over 2 hours, the compilation offers great value, and witnesses the broad diversity of sounds, styles and approaches that FatCat and its imprints (Splinter Series / 130701 / Split Series / 7” Series / E-RMX) have nurtured: from divergent forms of electronica to all manner of post-rock construction; downtempo breaks to minimal techno; sparse piano compositions to explosive noise outbursts and angular punk pop / funk.

Fired by an enthusiasm for the sounds then emerging from Detroit and Chicago, FatCat began life in 1990 as a tiny independent record store in the London satellite town of Crawley. Ending up in a small, dimly-lit basement in Covent Garden, the shop rapidly grew to gain a strong reputation as one of the country’s finest outlets for electronic music. Regular visitors to the shop included the likes of Jeff Mills, Juan Atkins, Ritchie Hawtin, Andy Weatherall, Steve Bicknell, Aphex Twin, etc. FatCat were Derrick May’s supporting DJs of choice during his residency at the ministry Of Sound, whilst FatCat’s Alex Knight drove the Underground Resistance tour bus during their UK visit, and was a regular DJ at London’S legendary Lost, Sabresonic and Blood Sugar clubs.

Besides being a major supporter of the techno and house scenes, FatCat became strongly associated as an early champion of the UK electronica scene that began to emerge in the early ‘90s. It was one of the first shops to really push artists like Black Dog, B12, Stasis, and Autechre, and labels like Eevolute, Rephlex and Warp.

Beyond this continually developing knowledge and love of music, there were strong ethics and beliefs fostered in the shop, which have continued to guide and inform the activities of the label. Avoiding any culture of elitism or snobbery, everyone was welcomed in and treated as equal, regardless of whether you wre some big name producer or just a regular music fan. The shop continually made a strong point to support and encourage emerging or unknown artists and producers, stocking CDRs, mixtapes and fanzines, passing on information, attempting to turn people on to new artists and to the music that excited and inspired us. We have tried to continue building the label around these attitudes: enthusiasm, integrity, honesty, support and respect…

The very first FatCat release (the ‘EVA’ EP by Japanese producer Web) saw light of day in November 1996, yet it wasn’t until the shop was forced to close in August 1997 that the label was properly activated. Initially given space under the shelter of One little Indian (both Bjork and OLI owner Derek Birkett were regularly shop customers), we spent our first year releasing a stream of 12” singles that quickly debunked the popular conception that FatCat would continue life after the shop as a techno label. From the opening Grain 12” to Various Artists, Live Human and Transient Waves the label began to open up a more challenging and genre-defying space for itself. From the start it was always our intention to escape the fixity of any easily identifiable label sound / style, and to instead open out a more adventurous and broad-ranging spectrum of music. These early singles were packaged in very minimal plain white sleeves, each bearing a small, simple hand stamp with the artist name, title and catalogue number – no snazzy photos, no expensive design work, just a simple belief that the music should speak for itself. This spartan aesthetic remained even for the Funkstorung remix of Bjork, which would have made it into the UK top 40 had the ‘artwork’ included a barcode. This early period also saw the launch of the Split Series, with initial releases from V/Vm / Third Eye Foundation and Gescom / Foehn arriving in labour-intensive hand-drilled and numbered sleeves (the number of holes drilled denoting the release’s position in the series) and opening out very different sounds / styles within the space of a single 12”.

None of us had ever run or worked for a label before (or even designed artwork on a PC) and this was a period of rapid learning and numerous mistakes. In 1998, FatCat left the One little Indian organisation and went fully independent. Having moved from our tiny OLI office in Battersea to Old Street (yet still working from a single shared PC), we began to release the first FatCat albums, and an attempt to build up an initial roster of artists - from the narcotic guitar haze of Transient waves to the improvised hiphop group Live Human or the highly original post-rock of Mice Parade to the pulsing, minimalist electronica of Process.

In February 1998, whilst DJ-ing at a party in an aircraft hangar in Rejkyavik, we stumbled upon an amazing, then unkown Icelandic group called Sigur Ros who were playing live supporting GusGus. Six months later, we released an EP (‘Svefn-G-Englar’) by the band which rapidly gained huge attention, with a whole host of big labels suddenly crawling out of the woodwork and attempting to woo the band with the offer of huge advances. This sudden introduction to the business practices of the majors was a real eye-opener, but thankfully our relationship with the band was solid enough that they decided to stick with FatCat, although it became clear that we would need to seek outside funding to enable us to operate at the level that the band required. After discussions with a number of distributors and bigger labels, we decided that our best option was a deal with a distribution company, and so from June 2000 we entered into a joint venture relationship with PIAS, an independent distribution network. It has been a long and at times arduous path, from us operating as a totally autonomous unit with next to no budget or cashflow, to a relationship that has required continual maintenance and organisation, and that has allowed us to expand the scope of our activities, and take the label to another level. Our level of creative autonomy has never been called into question, and we have continued to release a wide range of challenging and innovative music.

The amazing success of Sigur Ros left the label in a very strange position. On the one hand, we had that band selling huge numbers of records (we recently received our first ever silver disc for UK sales of ‘Agaetis Byrjun’), packing out large venues and touring with Radiohead, and at the other end of the spectrum, we were releasing and struggling to sell split 12”s of computer noise or putting on electronic events and split series parties that were struggling to attract 50 people. Over the past couple of years, we have striven to reduce this gap, to better organise ourselves and the various channels we operate through, and to push the whole label forwards. In early 2001, we bought a live-work space in Brighton, where the office has since been based. Having trailed them for over a year, another Icelandic band, Mum, were signed in the same year, and have proved another great success for the label. In the same period we have also consolidated our roster with the inclusion of artists like David Grubbs, Set Fire To Flames, Giddy Motors, Black Dice, Xinlisupreme, and HiM.

FatCat has always championed good, independent creativity, helping small artists and labels with mailouts and advice, releasing a CD of previously unreleased / unsigned artists, and hosting MP3s by new artists on the demo / DIY section of our website – an area where we also curated a wealth of contact details and information about the whole process of releasing your own music – from mastering, manufacturing and distribution to case studies of other small labels, and links to other resources. Never going out of our way to lure established, big name artists onboard, the bulk of our releases have come from music discovered via demos mailed to us, by stumbling upon bands playing un-hyped live shows, or by artists making contact with us. We have never chosen the easy route. Faced with the choice between picking up licenses offered on our favourite artists, or working with the virtually unknown, we tend to side with the latter. Artists that have seen their debut releases on FatCat have included Process, Team Doyobi, Motion, Duplo_Remote, Dorine_Muraille, Com.a, Xinlisupreme, Fonn, Immense, Grain, Giddy Motors, Drowsy, Party Of One, and Janek Schaefer.

Pushed on by our excitement at releasing and supporting amazing new music, hamstrung by our own various failings / disabilities, FatCat has been a day to day struggle, an ongoing argument between 5 or more people whose varying tastes, beliefs and histories overlap or collide at various points. It has been an intense experiment in self-organisation, and a balancing act between idealism and the harsh realities of time and economics. Over the rollercoaster course of the past six years, we have attempted to curate a continually shifting and challenging series of releases, to introduce new / unknown artists and to maintain a consistently high level of quality. Despite the apparent inconsistency and plurality of the different sounds and styles of music we have released, there do remain certain links and bonds that bind the catalogue together, allowing it to cohere into something more than merely a senseless slew of random events. But rather than spell everything out, we would prefer that you just listen in and make your own links, draw your own conclusions…

We titled this album ‘branches and routes’ because we are totally aware that none of this music was created in a vacuum; that music making and consuming is a social activity; that each of the artists represented here exists within their own context and ever-shifting network of peers. FatCat is just one small node on the map where many points meet or overlap. It is a diverse collection of different journeys and stories that refuses any single overriding narrative, and none of this would have been possible without the amazing support of all those artists, allies and peers existing around us. Having taken over a year to collate, this compilation represents a compromise between our favourite tracks from our back catalogue and a selection of tracks from recent and forthcoming FatCat albums. Most of the sides of the label are represented here – tracks from our Splinter Series and 130701 imprints, from our split 12” series and 7” series, and from the brief yet highly-creative e-rmx project. The basic intention behind this release is to provide an accessible yet diverse and high quality selection of tracks that will hopefully turn listeners on to new artists, and offer a glimpse into the wider scope of the label. Yet, far from being a full picture, this release (like these notes) presents just one selective cross-section of the label, a sample that perhaps leaves out as much as it admits. If you like what you hear here, we hope you will be inspired to investigate further.